Church leaders in the Democratic Republic of Congo (DRC) are asking for your prayers after a recent series of attacks on churches has left at least 17 Christians dead.

At least 17 Christians have been killed in a spate of attacks across the Democratic Republic of Congo (DRC) in July, and church leaders are asking for your prayers. The Allied Democratic Forces (ADF) militant group are suspected to be behind the attacks on Christians and churches. 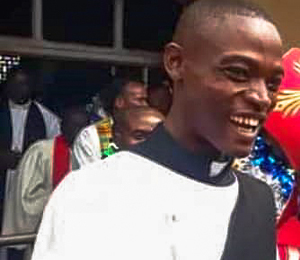 The Reverend Joel Tibasima Bamaraki (pictured right), who was a father in his 30s, and two church elders were killed in an attack in Kabasungora village in the Bahema-Boga locality on 23 July.

“Now it is worse because it is targeting the church leaders,” says Reverend Besisa Birahure, who leads a church in one of the areas that was attacked on 1 August. “We are overwhelmed. What can we do? Because of this massacre in which we are, which is one too many and we don’t know what to do… So keep praying for us; whatever difficulties become harder and harder, may God sustain us to stand firm.”

Who are the ADF?

Persecution in the DRC mostly takes the form of violent attacks. Although a very high percentage of the population are Christian, the Islamic extremist group ADF is responsible for the persecution of Christians in the east of the country, brutally attacking Christians and churches. Christian leaders who advocate against corruption risk harassment and interference from the government.

“We really need your prayers,” says Reverend Marcel Kisembo, dean of the Anglican cathedral in Boga. “At this time I would like to ask you to pray for us, for the situation we are going through since this month of July.”

You can hear and learn from our persecuted church family at Standing Strong, the annual gathering where Open Doors supporters can join in worship and prayer, and hear inspiring testimonies. This year’s event is in Nottingham and online.