Your support plants seeds of hope for Nigerian Christian widows

Rikiya was mourning her husband when Boko Haram attacked her village. They destroyed her home and everything she owned. But microloans mean she is able to earn money by farming - thanks to Open Doors supporters.

No matter where you live in the world, being widowed is very, very hard.

Most of us have experienced grief at some point, and know the pain and disorientation that it can cause. In this difficult time, facing coronavirus, we're more aware of this than ever. Grief is the same everywhere. In Nigeria, losing your husband can have an additional, drastic effect: being widowed can lead to social and economic exclusion and poverty.

That’s what Rikiya found after her husband died - and that’s why your support can make an enormous difference in the life of a vulnerable Christian widow.

Rikiya was married for nine years, during which she and her husband had three children: Jennifer, Peace and Joshua. In the ninth year, her husband became ill. Tragically, only two days after his symptoms appeared, he died. Rikiya was still in mourning when Islamic extremists Boko Haram came to attack her village.

She and her children managed to escape Boko Haram, and stayed in a local town for two months. When it was safe to return home, Rikiya found that her home and all her possessions had been destroyed.

“I was so traumatised,” says Rikiya. “My husband was gone, and Boko Haram had captured our village. We had nothing except the clothes on our backs.” 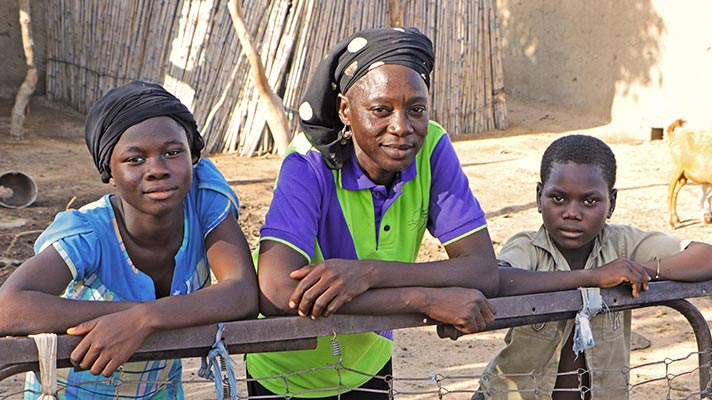 Rikiya and two of her children

THE SPREAD OF ISLAMIC EXTREMISM

Islamic extremism is spreading across West Africa. While Nigeria has remained at number 12 on Open Doors World Watch List, Burkina Faso has seen a shocking rise (from 61 to 28) and Cameroon is on the list for the first time, at 48. The numbers of violent attacks are increasing in these countries, and various Islamic militant groups are taking advantage of instability in several nations.

This broad trend has a very local impact. Nobody knows that better than the women of Dzangola, a remote village in Adamawa State, northern Nigeria – the same region as Rikiya’s village. In the past five years, Boko Haram has attacked Dzangola three times. Each time, they have killed and abducted people, burned down houses and left many lives and livelihoods destroyed.

“My husband was killed in the first attack,” remembers Kwate, an elderly woman who has lived in Dzangola through all the attacks. “When they pushed him into one of the huts, I ran away. I didn’t see how they set fire to the hut, because I was hiding. He kept shouting and screaming. And then I couldn’t hear his voice anymore.” Her husband was burned to death in the hut, and she only managed to escape because the militants couldn’t find her.

“I still go to farm and, with the little I get, I can feed myself,” says Kwate. “I used to do this work with my husband, but now nobody helps me.” 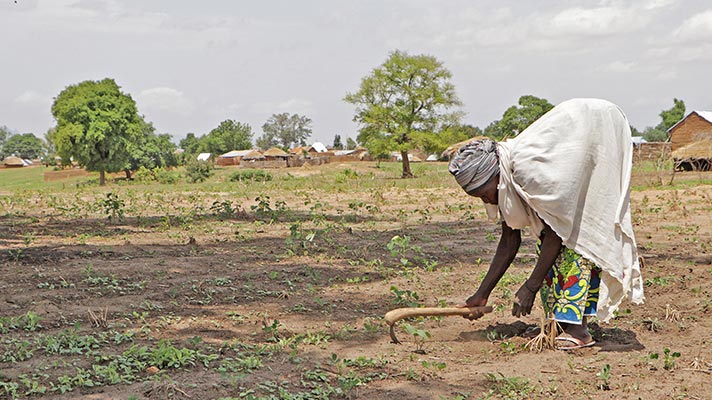 Mariayamu has similar painful memories, from the second attack: “We ran, but my husband stayed behind.” When Mariayamu and her children returned, she found out that the militants had killed her husband; he couldn’t run away, because of a physical condition.

This is the human cost of rising Islamic extremism, targeting Christian villages in Nigeria and across West Africa. These senseless killings leave behind vulnerable widows – and their lives don’t get easier once the militants have gone.

Across the world, grief doesn’t change – but the circumstances in which someone grieves do. In the UK and Ireland, a widow is usually treated with compassion and dignity. In northern Nigeria, being widowed puts you at the bottom of the social hierarchy. A woman who has lost her husband hasn’t just lost the person she loves; she’s lost a breadwinner, a vital contributor to her livelihood and a support for her children.

“I have been here sometime now, cultivating the land and getting good harvests,” says Mariayamu. “But with these attacks, I have lost everything – including my husband who has been my helper.”

A Christian widow is vulnerable on two further counts – her gender and her faith. Open Doors’ ongoing See. Change. campaign aims to ensure that every Christian woman who is doubly vulnerable for her faith and her gender is seen, heard, valued and empowered to reach her God-given potential. At the moment, women like Rikiya are persecuted for their faith, and their gender means that they face social and economic exclusion when they are widowed. Their isolation leads to poverty, and it’s almost impossible to get out of that spiral without help.

Thankfully, that help is available. Open Doors partners in Nigeria offer microloans and trauma counselling. Rikiya, Kwate and Mariayamu are among the Nigerian women receiving ongoing loans to pay for farming equipment – helping them on the path to long-term self-sufficiency.

With her loan, Rikiya was able to buy two goats. Each goat produces two kids every season, and Rikiya can then sell goats to pay for food, crops or clothing. “You are the ones who brought hope and healing back to me,” says Rikiya. “Honestly, if not for the loan I received to rear these goats, I don’t know what I would have done.” 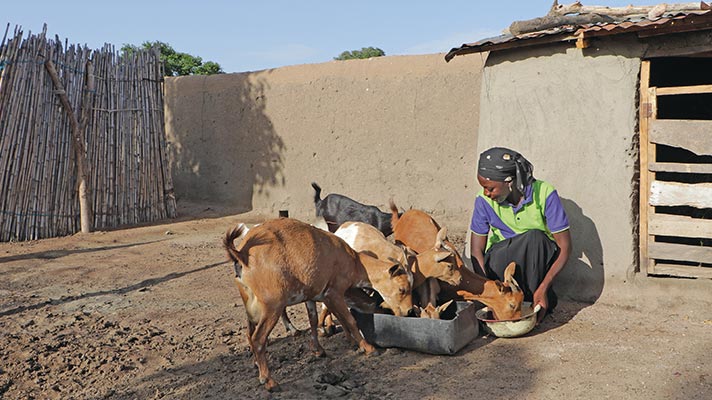 Rikiya and her goats

Despite all they have been through, the women in Dzangola also continue to praise God for His goodness and mercy. He has shown that He is truly ‘a defender of widows’ (Psalm 68:5), and that He ‘sustains the fatherless and the widow’ (Psalm 146:9). “He spared me and helps me in my small farm,” says Kwate. “I will continue to praise Him.” Mariayamu puts it simply: “Jesus is my Saviour. He can save me from any calamity.”

In Dzangola, they use the microloans to buy and sell grains, and some of the women use them for farming crops or animals. But although they are receiving help, their story isn’t over. They need continued support to keep them from being desperate and excluded again – to have hope for their future and their children’s futures.

You can seed hope for women like Rikiya, Mariayamu and Kwate – not just in Nigeria, but in many countries where vulnerable women are socially and economically excluded and praying for God’s intervention. See change by seeding change.

Dear Father, the defender and sustainer of widows, we pray that You would draw close to Rikiya, Kwate, Mariayamu and all other excluded and isolated Christian women. Please give them comfort and encouragement, and restore their hope, their dignity and their livelihoods. Thank You that You see them and that You love them.

*It costs £346 to provide trauma and spiritual healing in all areas of her life. Anything you can give towards this will help to bring hope and restoration.

God, here in the UK and Ireland we pray for our worldwide family who suffer extreme persecution because they have chosen to follow You. May all our supporting activities, advocacy, fundraising, prayer and events bring You glory and help our brothers and sisters who are following Jesus no matter the cost.