There are 100 million displaced persons in the world today. Among this number are Christians who, according to a new report by Open Doors, are being deliberately driven from their homes because of their faith. As the world marks World Refugee Day (Monday 20 June), we reveal the key findings of the report and share the story of a pastor driven from his home by the extremist Islamic violence sweeping across sub-Saharan Africa.

There are 100 million displaced persons around the world, many of whom are Christians

For seven months, Pastor Pengdwende barely slept in the same place twice. It was the same for many pastors in south western Burkina Faso. “Sometimes we slept in the bush for safety, sometimes we stayed indoors for a long time so no one would know that we are there,” he recalls. “Our village chief even sent a message to tell me I should leave, otherwise I could be killed.”

The threat of extremist groups has been steadily rising in Burkina Faso, causing untold grief to Christians. It’s symptomatic of the violence affecting believers across sub-Saharan Africa – a trend that’s driving many of our brothers and sisters from the places they call home.

“In the beginning, they would come to a village for just one person, to kidnap him or to kill him,” the pastor explains. “Only men were affected by their killing. Sometime later, they didn’t distinguish. They entered a village, and they would kill men, women, even sometimes the children, both Muslims and Christians.” 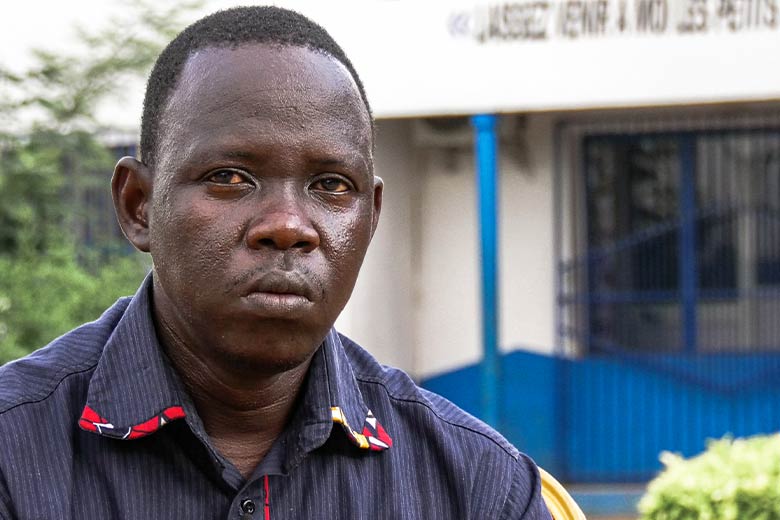 “There are many terrorist groups that are fighting. Some are fighting to become rich, some for religious purposes, some for territories,” he continues. “Every region has its own kind of violence.”

Pastor Pengdwende’s recollections are littered with Christians being attacked. Some escape death, some not. “A pastor from our area ran into terrorists as he was coming back from a funeral and was killed,” he shares of one incident.

As a pastor, Pengdwende is especially vulnerable. Despite people urging him to flee, he refused until he had no option. On the day he was due to leave, attackers surrounded the church before quickly leaving. The pastor calls it a ‘miracle’. He and his family arrived in another village, but a week later, they were forced to flee again following yet another attack.

Among this number are millions of Christians, and a new report by Open Doors called The Church on the Run: IDP & Refugee Report 2022 reveals that the displacement of many of them is a ‘deliberate strategy’ to weaken, silence or completely eradicate Christian populations, by governments, armed extremist groups, communities and even families. “They don’t just attack, they attack in order to uproot,” shares one expert on the strategy of the Islamic militant group Boko Haram.

“Part of this deliberate strategy is to fracture religious communities,” explains Helene Fisher, Open Doors’ Global Gender Persecution Specialist. “Displacement is not just a by-product of persecution, but, in many cases, it is an intentional part of a broader strategy to drive out Christianity from the community or country.”

"Christians are in sorrow and tears" Pastor Pengdwende

The report goes on to explain that the displacement of Christians is mostly driven by their families (both immediate and extended). They can withhold from believers basics for survival, such as food or shelter, and can threaten their physical safety with violence or death threats. Meanwhile, as Pastor Pengdwende’s story highlights, violent groups and government officials single out key figures like church leaders for persecution. Their departure can be the trigger for other Christian families in the community to move.

In many cases, Christians arrive in their new ‘homes’ (often IDP camps) only to be greeted by more persecution. They can be denied basic aid (as experienced by Christian Rohingyas in Cox’s Bazaar, Bangladesh) or face attack from other displaced communities. This happens whilst they are already processing severe trauma from their initial displacement.

What’s more, these challenges can be compounded by a lack of understanding and response from humanitarian actors. This can range from unintentional neglect to deliberate targeting of displaced Christians, by the people meant to help them.

The report highlights the long-term impact of displacement in Iraq, where a thriving community of over a million Christians has dwindled to just 166,000. “Everyone is slowly leaving,” says an Iraqi refugee. “It happens quietly, but it is happening every day. People pack up their things, lock their doors, and leave behind their entire lives.”

Returning to Burkina Faso, Pastor Pengdwende adds, “Christians are in sorrow and tears. When you have been born and raised somewhere, and you wake up one morning with only a few minutes to flee with only what you are wearing, and if your wife maybe has to bring only a few things with her to join you where you hide, it isn’t simple.

“We have been scattered. Some are in Ouagadougou. Wherever they have relatives who can receive them, Christians just go there. That’s how people were scattered. No one has returned home. It is only Arbinda and Gorgadji that still have some local inhabitants. It is also there that more than 80 people were killed last month.”

“The findings of this report present a vital challenge to everyone trying to offer aid and assistance to displaced communities,” says Eva Brown, a Senior Research Analyst for Open Doors. “Unless they truly understand the ‘faith factor’ at work in these massive diasporas, then they will never be able to properly protect and help large numbers of those that they are attempting to serve.”

Thankfully, your prayers and gifts are ensuring that many of the Christians forced from their homes have been able to access vital support. This includes Pastor Pengdwende and his church.

“Your ministry is very useful to us,” he shares. “Some time ago, you came to help us when we were in Kaya as displaced. We needed food and you gave us food. While in Bobo Dioulassou, you helped us with some money so that we may start doing some jobs. If not for that, maybe our tears wouldn’t have been wiped away, we would haven’t been taken care of.

“Your organisation is helping many people to have peace of heart, because when you are in difficulties and someone is encouraging you, there is nothing better than that.” These words reflect the impact you’re making to the lives of displaced Christians across the world. Thank you for your faithful prayers and support.

World | December 01, 2022
Christmas through the lens of children of the persecuted church
World | November 22, 2022
Searching for Jesus on Google – how thousands are exploring faith on the Arabian Peninsula
World | September 28, 2022
Celebrating the life of Brother Andrew (1928-2022)
View World country page