Two recent incidents highlight the dangers facing those in Vietnam and Laos who convert from tribal beliefs to Christianity.

A church in Laos, where Christian converts can face huge pressure from family and the local community to deny Jesus

This summer, Hoa* from Vietnam gave her life to Jesus. The single mother to a three-year-old girl heard about the gospel from a friend. But coming from a tribal Hmong background, she knew it was a risky decision to make – and so it proved.

On hearing of her conversion, neighbours said she could continue living in the village but must renounce her new faith, otherwise she’d be kicked out. Hoa bravely chose Jesus. “I will follow my Lord who forgave my sins,” she said. “I will accept any cost because of my new-found faith.” 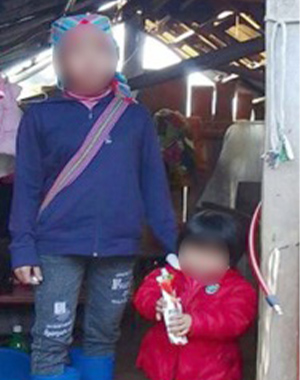 Hao and her three-year-old daughter

Hoa and her daughter are now living in a small temporary shelter in a village far from their home. An Open Doors local partner is providing them with food.

Father and son imprisoned for faith

In neighbouring Laos, another believer also courageously refused to deny Jesus amid intense pressure from their community.

In early 2021, Sonexay* (49) left the animist belief he grew up with to follow Jesus. When the village chief discovered this, Sonexay was summoned to renounce his faith, otherwise the police will arrest him and throw his family out of the village. Sonexay bravely stood firm, having experienced Jesus transform his life.

The police subsequently tried to arrest him on a couple of occasions but failed. They eventually detained him in August and held him for a month. Sonexay’s 19-year-old son, Mington*, was also arrested in May and released in July.

Local believers played an instrumental role in the release of both Sonexay and Mington. It’s a lovely demonstration of Galatians 6:2: “Carry each other’s burdens, and in this way you will fulfil the law of Christ.”

Vietnam is number 19 on the World Watch List, whilst Laos is number 26. Both countries are Buddhist-majority, though tribal religions hold great sway in many rural regions. Since religion is closely identified with ethnicity in many parts of Vietnam and Laos, leaving a traditional belief for Christianity is seen as a betrayal of culture and community.

Words of Peace is a new suite of resources that you and your church can use over the Christmas period. It includes a carol sheet, videos and the opportunity to send a Christmas card from your church to persecuted children.