Good news and hope on the World Watch List

When the Open Doors World Watch List is published, your eye is probably drawn to the top of the list. To the countries where Christians suffer the most for following Jesus. And to those places where persecution is getting worse.

But there is good news too! While persecution is getting worse around the world, some of your brothers and sisters are seeing amazing answers to prayer.

Praise God, 2020 was a year of great news for Christians in Sudan. First, in July, the transitional government announced they would end the death penalty for people who leave Islam, as well as other reforms that repealed laws that violated human rights. Then, in September, the government agreed to remove Islam as its state religion – after 30 years of Islamic law. Most recently, Christian and Muslim religious leaders in Sudan have signed a declaration, joining forces to promote religious freedom.

This is an extraordinary and very welcome change for Sudan, which falls several places in the World Watch List (from seven to 13). Thank you so much for faithfully praying for your brothers and sisters in Sudan for so many years. There is still much to be done to tackle stigma and persecution from communities and families, but 2020 saw a huge leap forward for Sudan. Hallelujah! 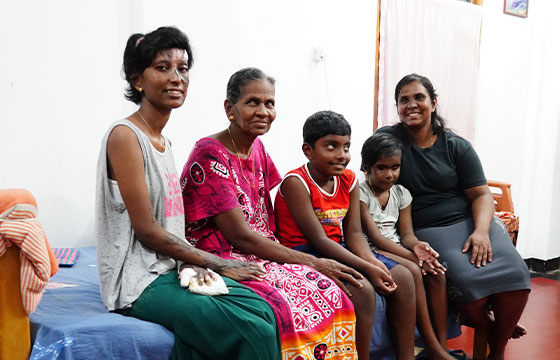 Sri Lanka is no longer in the World Watch List Top 50, having fallen 22 places, from number 30 to number 52. That’s great news, and greatly welcomed after the horrendous church bombings at Easter 2019, in which more than 250 people were killed. Debbie (pictured) lost her parents and her sight in those attacks. Thankfully, nothing like this happened in Sri Lanka in 2020, and that's largely why the persecution score changed so dramatically. Praise God that those who seek to harm or kill Sri Lankans who choose to follow Jesus were thwarted.

Though the pandemic has been used to persecute believers who were already vulnerable, it has also given thousands of opportunities to show Jesus’s love. That includes 283,000 believers in Asia who received Covid-19 food and aid, and hundreds of thousands in Africa too. Many were in desperate need, having lost their income due to lockdown restrictions.

And persecuted believers have been able to show the love of Christ to their communities too. One of the most powerful stories was of a Christian community in Sri Lanka who shared essential Covid-19 aid with their neighbours – including those who had recently physically attacked them.

Persecution easing in some countries

Not every answer to prayer comes with such a sudden change as Sudan – and that was after three decades of praying. Many countries have seen a slight easing in the level of persecution – with changes for the better in Syria, Saudi Arabia, the Maldives, Egypt, Uzbekistan, Laos, Algeria and Central African Republic.

While the persecution scores for these countries have only changed slightly, this represents real difference in the lives of vulnerable believers. Please keep praying that this is a step in a gradual improvement in religious freedom – and for each individual living in these difficult situations and still choosing to follow Jesus.

Dear Lord, thank You for the work You are doing in the world, to protect Your children. We ask that all the countries in the World Watch List top 50 would one day resound with cries of worship to You, and that they would be places where Your holy name is known and glorified. Please continue to answer the prayers of Your children, and may they all be able to follow You in peace and security. Amen.

Order the World Watch List 2021 Top 50 booklet to help you pray for your persecuted family - as well as discovering testimonies, trends articles and a map of worldwide persecution.

Ask your MP to #StandForTruth India