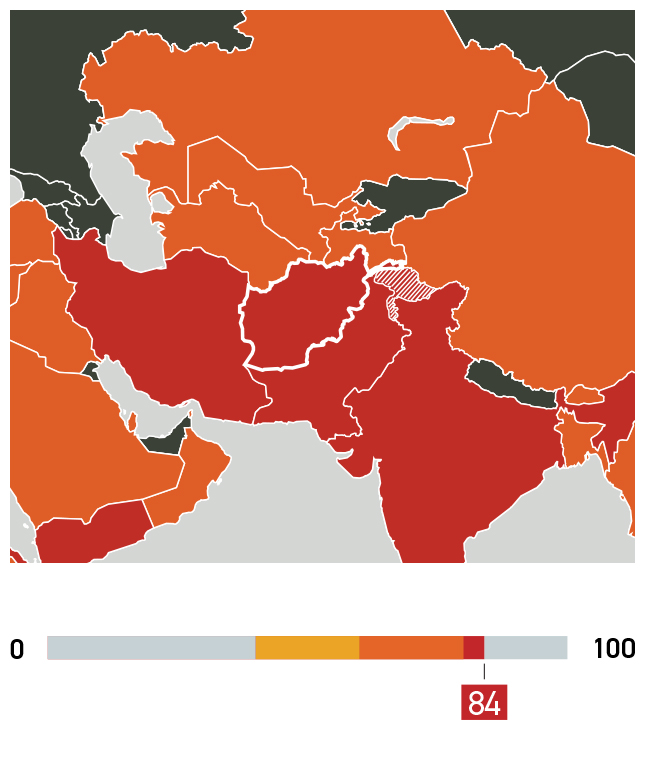 How many Christians are there in Afghanistan?

There are almost 41 million people in Afghanistan, most of whom are Muslim. Given that many Christians have been forced deeper underground and must keep their faith hidden, it’s difficult to get an exact idea of how many believers live in the country, but it is estimated to be in the thousands.

How are Christians persecuted in Afghanistan?

The Taliban’s takeover of power in August 2021 forced many Christians either further underground or away from the country entirely. Many house groups closed, if not all, with believers forced to leave behind everything they own. This legacy continues into 2022.

The rigid form of society imposed by the militant group leaves no room for deviation, meaning Christians – most of whom are converts from Islam – must keep their faith secret. The consequences of discovery remain unthinkable.

Although conversions usually happen as a family unit in Afghanistan, if a woman decides to convert to Christianity on her own, discovery can bring violence, house arrest, forced marriage or sexual abuse. Women and girls already suffer acute oppression and discrimination under the Taliban. Following Jesus can severely exacerbate this.

Since men are at the forefront of public life, male converts can face harassment, ostracism, kidnap, violence and death, if discovered. Consequently, Christian men opt to keep low profiles, with some choosing low-level positions in the workplace, to avoid unwanted attention.

Thousands of Afghan refugees are now living in countries bordering Afghanistan, often in poor conditions in camps for displaced people, and many Christians are among them.

“The Taliban are conducting a door-to-door search to find us. God alone knows who has informed them about the whereabouts and identities of the believers. If they find us, they kill believers on the spot.” Gulshan is a secret believer from afghanistan

Even prior to the Taliban’s seizure of power August 2021, living as Christian carried enormous risk, particularly for converts. But the militant group’s takeover has made conditions even more dangerous for our Afghan family, forcing them to flee the country or go deeper underground.

One person who knows all too well the dangers of following Jesus in Afghanistan is Gulshan (name changed). Relatives of hers have been killed for their faith, whilst her Christian neighbours have disappeared. She hopes and pray they are safe somewhere.

“It is our great desire to join with our brothers and sisters and worship God together, but now this is not possible,” says Gulshan “We can only meet our pastor in the dead of night, so no one can identify him or us.” She and her family also face the threat of starvation, due to food shortages in the country.

Despite everything she is risking, Gulshan knows that she is following a faithful God. “Our faith is in Christ, and will remain so until our last breath. Dear God, help us to find a straight and smooth path in our lives.”

Knowing that you are praying for Afghan Christians like her makes an enormous difference for Gulshan. “I know that my Jesus and yours is one,” she says. “Through prayer, we are united as we are the body of Christ. May the Lord make you aware of our pain.

Is it getting easier to be a Christian in Afghanistan?

Despite dropping from first place to ninth, Afghan Christians remain in grave danger and many have been forced further underground, making them less visible for attack.

In the past year, the Taliban has turned their attention to consolidating power and have not been explicitly targeting non-Muslims – so there have been fewer violent incidents against Christians that can be clearly linked to their faith. In this complex situation, persecution is affecting almost everyone in many different ways.

However, since leaving Islam is considered punishable by death under the prevailing Islamic law, choosing to follow Jesus remains an extraordinarily brave decision to make, because it can have devastating consequences – be it at the hands of the authorities, or even a believer’s family, tribe or clan in an attempt to preserve its ‘honour’.

How can I help Christians in Afghanistan?

Please keep praying for your brothers and sisters in Afghanistan. Your prayers make an enormous difference to those following Jesus no matter the cost.

Heavenly Father, we cannot imagine what it must be like to be a Christian in Afghanistan, but You know what they are experiencing. We ask that each of our Afghan brothers and sisters – whether in or outside the country – will know the depths of Your sustaining and strengthening presence. Protect them from harm, provide opportunities for believers to gather secretly, and meet all physical, emotional and spiritual needs. Soften the hearts of the Taliban towards women and religious minorities; may they see the value they bring to Afghan life. We boldly pray that Taliban leaders will have encounters with You that will transform not only their lives but the lives of people across Afghanistan. May Your kingdom break out in Afghanistan. Amen.