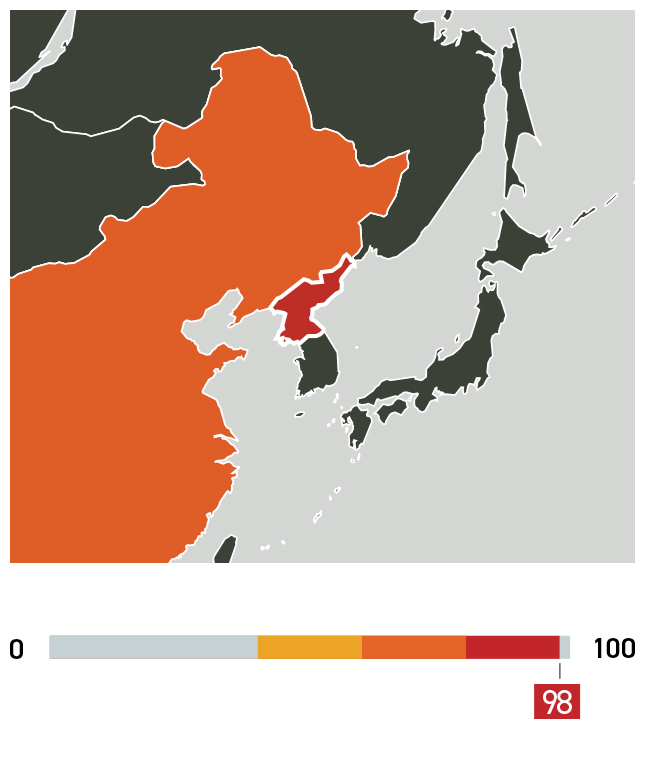 How many Christians are there in North Korea?

Open Doors estimates there to be some 400,000 Christians in North Korea, which is less than two per cent of the country’s total population of 26 million people.

How are Christians persecuted in North Korea?

North Korea is once more the hardest place in the world to follow Jesus, and a brutally hostile place for Christians to live. If discovered by the authorities, believers are either sent to labour camps as political prisoners where the conditions are atrocious, or killed on the spot – and their families will share their fate as well. Christians have absolutely no freedom. It is almost impossible for believers to gather or meet to worship. Those who dare to meet must do so in utmost secrecy – and at enormous risk. Even owning a Bible is a serious crime and will be severely punished.

A report issued in 2022 by The International Bar Association and The Committee for Human Rights in North Korea said that Christians are particularly targeted and exposed to torture in North Korean prisons. "Detention periods have been documented as being longer for Christians than other groups, and witnesses have reported that ‘identified Christians are interrogated for longer periods, usually under torture’, and subjected to some of the worst forms of torture to force them to incriminate others during interrogation,” it said.

The patriarchal society of North Korea means that control over the population is especially focused on men. All men must attend workplaces allocated by the government. They must confirm their attendance and cannot stop working for any private reason, making it harder for them to flee the country than women. Those exposed as Christians will likely be publicly shamed, or much worse.

The mandatory ten-year military conscription (starting at 17 for young men) can expose any familial connection to Christianity. If a connection is found, men are denied party membership and given the lowest positions in universities and workplaces. Christian men held in labour camps suffer maltreatment and physical abuse.

Most North Korean refugees are women and are greatly at risk of forced repatriation, severe interrogation (including torture) and trafficking. The sexual abuse of women at one of the country’s notorious labour camps is believed to be endemic. The authorities even target Christian women and girls for sexual abuse in a deliberate attempt to undermine the biblical approach to sexual purity. Repatriated Christian women made pregnant by a Chinese father (often by being a victim of human trafficking) can also face forced abortions by the authorities who want to prevent the North Korean bloodline from being ‘defiled’.

“Step by step, I realise how the Holy Spirit leads my life. I decide to put all things onto God’s hands.”Yong-Gi, a North Korean Christian helped through a safehouse ministry run by Open Doors fieldworkers.

In North Korea, Christianity is presented as an enemy of the country’s leadership and society. This means that many North Koreans greet any talk of Jesus with fear and deep suspicion. This is a huge barrier for fieldworkers as they seek to help those who’ve bravely fled the country and even been caught in trafficking across the border.

Amazingly, many of their hearts soften and they give their lives to Jesus. But it’s an enormously risky step to make, given how Christianity is regarded in their homeland. Escaping North Korea already made these North Koreans an enemy of the state – becoming a Christian entrenches this.

One person who encountered Jesus at a safe house in China is Yong-Gi (name changed). “I would like to thank God’s grace that He made my dream come true,” she says. “This morning, God spoke to me through Bible verses, and now all I can do is to follow His commands. Thank you always for your prayers and sacrifice for the sake of us.”

Is it getting harder to be a Christian in North Korea?

It seemed impossible that it could get any worse for Christians in North Korea, but it has, aided by a rise in reported incidents of violence.

In one horrifying incident that Open Doors heard about from reliable sources, several dozen North Korean believers from different underground churches were discovered and executed. More than 100 members of their families were said to have been rounded up and sent to labour camps.

Another contributory factor is the recently introduced ‘anti-reactionary thought law’, which makes it clear that being a Christian and/or possessing a Bible is a serious crime and will be severely punished.

How can I help Christians in North Korea?

Please keep praying for your brothers and sisters in North Korea. Your prayers make an enormous difference to those following Jesus no matter the cost.

Father God, we thank You for the remarkable bravery of our brothers and sisters in North Korea. Continue to encourage, equip and empower them as they follow You amid such extreme persecution. Protect secret gatherings of believers – may their meetings be places of divine encounter. Give wisdom, boldness and discernment to Your children to know how to express their faith in society without drawing the attention of the authorities. We cry out to You for this nation, Lord, asking that You will build Your church and soften the hardened hearts of Kim Jong-un and his regime. Amen.