The Olive Tree Bible app has been removed from China’s Apple Store after its creators were unable to provide a permit to distribute the app in China during a review process. Sadly, this is part of a continuing trend that is seeing the Chinese government assert their control over religious groups in the country.

Since the ban of online sales of Bibles in 2018, Chinese Christians are relying more on technology to access Scripture

The Olive Tree Bible app has been removed from China’s Apple Store after its creators were unable to provide a permit to distribute the app in China during a review process. It comes as part of a wider crackdown by Chinese authorities on Christian resources found online.

In China, the sale of online Bibles was banned in 2018 – therefore, many Chinese Christians rely on the Bible apps on their phones to access Scripture. Sadly, this latest news is a continuation of a trend that is seeing the Chinese government assert their control over religious groups in the country. 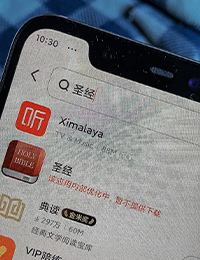 The Olive Tree Bible
app can no longer be
downloaded

“This sets a dangerous precedent for religious freedom,” says Dr David Landrum, Director of Advocacy for Open Doors UK & Ireland. “Historically, more than any other influence, it is access to the Bible that has enabled religious freedom, which in turn is the foundation for so many other human rights. This is precisely why the Chinese Communist Party (CCP) are so implacably opposed to Chinese people having access to it.

“Although much Apple technology is produced in China, I hope that the company will speak out against this blatant religious discrimination.”

Apple has also taken down a Quran app, the Quran Majeed, from its China store at the government’s request. The removal of both apps was highlighted on Apple Censorship - a website that acts as a watchdog to Apple's App Store.

A spokesperson from the Olive Tree Bible app told the BBC: “Since we did not have the permit and needed to get our app update approved and out to customers, we removed our Bible app from China's App Store.”

A local Open Doors partner warns that, under President Xi Jinping's leadership, the CCP has tightened its control over the country, including its churches and mosques. The partner – who can’t be named for security reasons – says: “Religion is seen as a potential de-stabiliser and certainly not aligned with Chinese socialist ideology. Citizens must 'be directed' rather than allowed freedom of speech or belief. It’s as if [President] Xi Jinping believes the time has come to rein in and realign religions, particularly Islam and Christianity.”

Over the last two years, China has risen 26 places on Open Doors’ World Watch List. In the last year, Chinese Christians have seen their WeChat (a popular messaging app) public accounts deleted or blocked by the authorities as the control over cyberspace tightens further. On 4 October, Shenzhen Christian Ms Han Li was sentenced to one year and three months for selling portable digital Bible players.

You can write to believers in the Middle East and send them hope and encouragement - they'd love to hear from you!