Just before Christmas, Iraqi politicians made some amazing changes: cementing Christmas Day as a national holiday and establishing a committee to return stolen properties to their rightful Christian owners.

On 16 December 2020, Iraq's parliament passed a bill making Christmas Day an annual national holiday in the majority-Muslim country. In 2018, the government had established a national holiday for Christmas on a year-to-year basis. “It is no longer a temporary measure to be renewed every year. This is a message of great value and great hope for Christians," Basilio Yaldo, Auxiliary Bishop of the Chaldean Catholic Church in Baghdad told AsiaNews. He noted the decision was clearly connected to the visit of Pope Francis to Iraq in March. 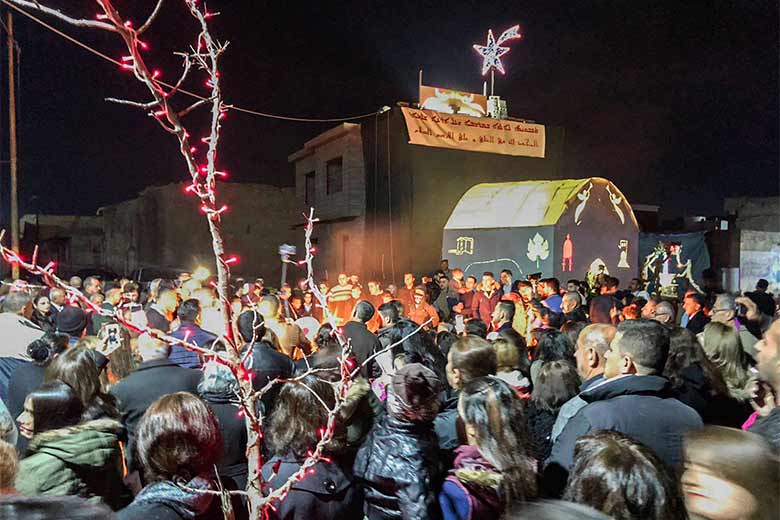 Not only has Christmas become a fixed holiday, but politicians are working to restore Christians' homes to them as they come back to Iraq

EVERY £21
could give a Bible to three believers from a country where Christians face extreme persecution.
DONATE TODAY

On Christmas Eve, Iraq's President, Barham Salih, a Sunni Muslim, thanked parliament for passing the bill when he spoke while attending Mass at St. Joseph's Cathedral in Baghdad. “[The government] must make serious efforts to enable Iraqi Christians to return, and to live a secure and dignified life in their homeland,” he said. “Their religious and cultural rights must be protected. As the country's history shows, they are a major and important part of Iraq's people.”

Making Christmas a fixed national holiday is not the only good news to come from Iraq in the last month. Another Iraqi politician is taking steps to make sure that Iraqi believers are able to return to their homes in peace.

Since 2003, a number of wars – as well as the incursion of so-called Islamic State and sectarian violence – have forced more than 80 percent of Iraqi Christians to flee their homeland. As they have returned slowly, they have encountered challenges such as lack of basic services and security; there are reports of a resurgence of Islamic State and local militias fighting for control. Sometimes, if their homes had not been destroyed, they find them occupied by strangers.

“With an increase in tribal and sectarian divisions we see the seizure of Christian properties in Iraq, especially in the capital Baghdad,” a local source told Open Doors. “Those who seized these properties know very well that a Christian, being a minority, cannot risk themselves and complain; even if they come to complain their complaint will not be settled easily within the courts,” the source said.

A popular and powerful Shia cleric and politician, Muqtada al-Sadr, has now announced that he is establishing a committee that will look into these cases with the aim to redress and restore justice. On 3 January, he sent the Chaldean Patriarch, Louis Raphael Sako, the names and contact details of the committee members. Christians can contact them if their property has been seized illegally in recent years.

The Iraqi government are listening to Christian leaders

“We are hopeful that the new committee will meet regularly and work efficiently to investigate expropriated properties and restore them to their rightful owners,” said a spokesperson for the Open Doors Hope for the Middle East campaign. “Action to resolve this widespread issue would protect Christians’ right to property, contribute towards reconciliation and enable better living conditions – all of which are essential for Christians to remain and flourish in Iraq.”

The spokesperson, known as Rami, said it isn't surprising that Iraqi Christians would rather wait and see what comes of these promises than celebrate too soon. “We urge the Iraqi government to drive this committee forward in 2021.”

Late last year, Open Doors published a report highlighting the key role local faith communities play in rebuilding communities post-conflict. “The government listening to Christian leaders is a good way to incorporate minority Christians in Iraqi society,” Rami continued. “Local faith leaders have the trust of those in their community and the knowledge and skills built from years of responding to physical and spiritual needs.”