Hope for the Middle East – 5 ways to pray for Syria

Syria is not on the news as much as it was at the height of the civil war. But, nearly a decade on, the country is still facing conflict and still urgently needs our prayers and support.

It is nearly 10 years since the war in Syria began. The impact on the church has been devastating. Lives have been lost, homes destroyed, families displaced, and many have fled the country. Before the war, there were about 1.8 million Christians in the country. Today only an estimated 800,000 remain.

Whilst there are signs of hope, everyday life remains filled with enormous challenges for the Syrian people – not least the invisible threat of Covid-19. As part of Open Doors’ ongoing Hope for the Middle East campaign – the focus of the latest magazine – we have highlighted five areas for supporters to concentrate your prayers on.

Believers from Muslim backgrounds in Syria continue to face all kinds of verbal, social, psychological and even physical persecution due to their faith — especially those who stayed in the occupied areas.

Every £49
could provide a monthly food relief pack for a persecuted family in Syria.
GIVE TODAY

On 30 July, 40-year-old Radwan Mohammad bin Muhammad was kidnapped by the extremist group Sham Legion, an ally of the Turkish military. The man was taken from his village of Jaqmaq Kabir, north west Syria, shortly after his wife died from an illness. Like his wife, Radwan comes from a Muslim background. The extremist group accuse him of apostasy. It is the second time he has been kidnapped.

You might remember Jina Baydun, the young mother in Aleppo who was featured in The Hope for the Middle East campaign last year. Her husband remains missing after he was kidnapped on 15 May 2013 during the war. She suffers from brain atrophy and is unable to work. 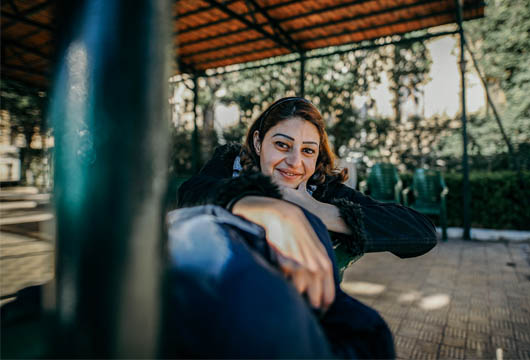 Father, bring about the immediate and safe release of Radwan and the husband of Jina Baydun. Bring an end to all kidnappings – do a transforming work in the hearts of extremist groups – and protect all Christians at risk of hostility and persecution because of their decision to follow Jesus. Amen.

Tragically, five Christian doctors and two church leaders died in August after contracting Covid-19. Several other leaders have tested positive for the virus. One church in Damascus has been particularly affected, after its leader and several congregants became infected.

The pandemic has closed churches and disrupted activities. Summer camp is vital for children in churches across Syria. This includes children from the Nazarene church in Latakia. Usually around 100 children get away each year for five days to have fun together and deepen their relationships with Jesus. Due to Covid-19, it is not yet confirmed if the camp will take place this year.

Lord Jesus, comfort and strengthen the families of the doctors and leaders who have died from Covid-19. Protect those who are working on the frontline against the virus, and heal those who have been infected. Provide ways for Christian meetings, including the children’s camps, to take place safely. Amen.

There are concerns over the vulnerability and behaviour of the country’s young people. Lobaba is a 47-year-old woman who died on 25 August because her 15-year-old son found a hand-grenade in their yard and activated it. She tried to protect him, and died in the blast. Weapons and explosives are widely available in Syria. Alongside this, many young people are sinking into drugs and immoral behaviour.

She tried to protect him, and died in the blast.

Dear God, reveal to young people the futility of drugs and immoral behaviour, and raise up people who will show them a better way. Protect young people from the dangers of weapons and explosives. Make the streets of Syria safe again. Amen.

4.    Pray for Syrians’ health and welfare

The situation is made worse with many Syrians believing false rumours that the virus is a hoax. Only around two in every 10 people are wearing masks, with people claiming the virus is ‘not real’ and ‘an international conspiracy’. This is likely to have contributed to a recent a spike in infections.

Hospitals are struggling to cope with ongoing increase in daily infections. Furthermore, due to corruption in the health system, powerful people who are not sick and have connections with the government are buying oxygen bottles to ensure their safety, leaving sick people in the hospitals without oxygen.

Every £60
could contribute to medical care for a believer in Syria.
GIVE TODAY

Meanwhile, families in Al-Hasakah (north east Syria) have been without water for over three weeks now after the water supply was cut off, causing yet more suffering and anguish.

Heavenly Father, stem the flow of infection in Syria. Protect the IDP camps and reinforce in people’s hearts the reality of Covid-19. Make a way for healthcare to reach all those in need, bring an end to all inequality, and restore water to Al-Hasakah. Amen.

The Syrian economy is suffering. Inflation has led to a rise in costs for necessities. Traders have taken advantage of the absence of government supervision of the market, which has led to profiteering. More positively, after months of rises, the price of the US dollar in the country is stabilising, and since the cost of products links to this, there is hope this will help galvanise the economy.

Sadly, a wave of crime has hit the country, possibly due to the financial needs caused by the fragile economy. There are daily reports of murder, theft and rape, as well as suicide – the Ministry of Internal Affairs said that in five days there had been three reported cases of suicide.

Lord Jesus, bring peace, purity and prosperity to the Syrian economy. Lift those who are suffering depression and provide for all their needs. Quench the urge to commit crime, and lead people down life-giving paths. Amen.

Heavenly Father, empower, encourage and equip our brothers and sisters in Syria, facing different trials and challenges whilst seeking to share your love with others. Bring peace and stability to the country, and to the whole of the Middle East. Amen.