Children have been using our Post-It! resource to encourage children of the persecuted church in a whole variety of ways. One way is by sending drawings to children in Central Asia.

Children have been using our Post It! resource to encourage children of the persecuted church in a whole variety of ways. One way is by sending drawings to children in Central Asia.

Open Doors workers took some of these cards on a recent visit to some secret churches in Central Asia. One of the workers, Jan*, told us, “The children were so happy to receive your beautiful drawings.” Nine-year-old Elizara recorded this message to say thank you to the children who have sent drawings and prayed prayers for children in Central Asia.

Jan explained some of the challenges facing Christian children in Central Asia. "To be part of a former Muslim family and become believers is difficult for children, especially in school. Other children say, ‘Oh, now you don’t belong to us anymore’, so children are rejected. They’re young, they’re vulnerable, they want to be a part of a group. Sometimes they are also beaten - children come home with their clothes damaged, because they are now believers in God, and not part of the Muslim society anymore.

"Also, when their parents are persecuted, children also feel the tension of what’s happening at home. I remember once that a young girl received a children’s Bible from an Open Doors worker, and the first thing she said to her parents was, ‘Let’s hide this! It’s a secret, right?’ She was already aware of this being a forbidden book. She was very young. They sense the atmosphere of persecution."

With bullying at school and tensions at home, it's easy to understand why these children need encouragement. The Open Doors workers who delivered the cards were so pleased to be able to show the children they met that they aren't alone, and that children around the world have been thinking of them and praying for them. 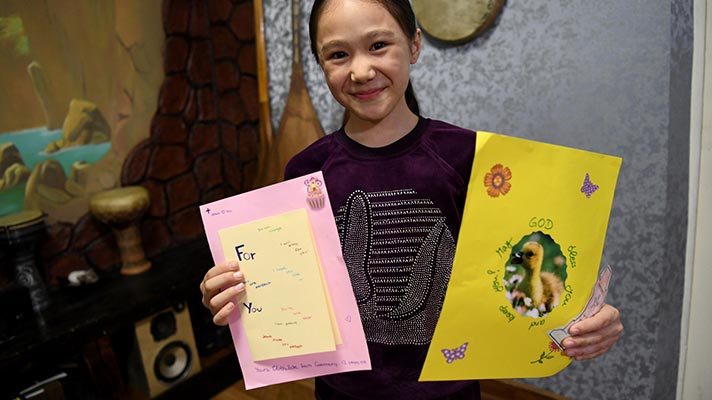 Dialara with some of the letters she received 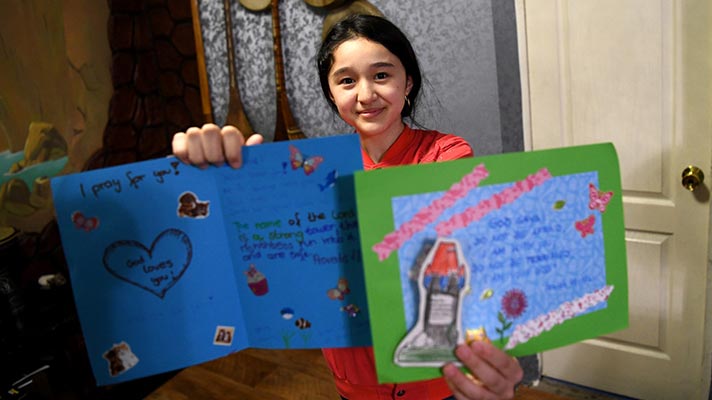 Alex*, another Open Doors worker, shares, "What was wonderful was that, the next day, Diana and Dialara had taken it upon themselves to write some cards to give to us to send back to the children that had written to them! Of course, they were only able to produce a couple of cards and thank you notes, but we were able to share them as an acknowledgement to all those who had taken the time to send cards. Seeing the impact that the cards had on them and then seeing that they were keen to reciprocate was something very special. It was just a lovely moment of the global church being one family." We sent the drawings Diana and Dialara had created to a group of children in Germany, the first group that sent drawings to children in Central Asia.

Please continue to pray for Christian children in Central Asia. Your prayers and support enable Open Doors local partners to support them with children's Bibles, summer camps, and weekly discipleship groups for older children and young people. Jan explains that the summer camps are particularly important for the children. "They really can be connected with others and see that they’re not the only one who is a Christian - they really can gather and connect." Thank you for making work like this possible.